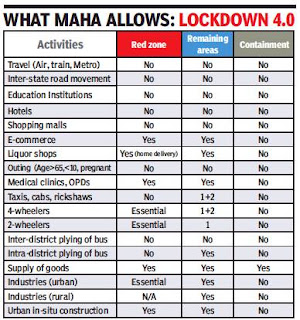 Maharashtra has simplified the classification of various regions, based on their coronavirus case load, into red and non-red zones. The decision comes in the wake of the Centre’s move to delegate powers of delineation to the states.

All municipal corporation areas within the Mumbai Metropolitian Region fall in the red zone apart from municipal corporations of Pune, Solapur, Aurangabad, Malegaon, Nashik, Dhule, Jalgaon, Akola and Amaravati. Yavatmal, Satara, Nagpur which were in red zone, have been moved out though Nagpur district officials are likely to write to the state asking it to keep Nagpur city in the red zone category.

Health Minister Rajesh Tope said, “We are maintaining status quo in red zones as cases from these areas are still very high. In the remaining areas, we have given maximum relaxation. Industries have already opened in nonred zones and now more relaxations have been given to nonred zones to normalise life to a certain extent," said Tope.

Officials said chief minister Uddhav Thackeray balked at allowing more activities to resume in red zones despite requests from various sections. Under the new rules which come into effect from May 22, essential shops will remain open in red zones and only those non-essential shops, which have been already allowed by the respective municipal corporation, will function. For example, as BMC has permitted electronics and hardware shops to open shutters, those can continue to stay open. Liquor shops, wherever permitted, will operate, through home delivery or otherwise.

"The BMC had asked liquor shops in Mumbai to shut shop after two days of them re-opening due to huge crowds. A decision on whether to allow them to re-open for home delivery will have to be taken," said an official. Online sale of liquor may be soon allowed in Mumbai, said officials.

While the Centre has allowed private offices to open in red zones at 33% staff capacity, Maharashtra has skirted it. But it has allowed e-commerce deliveries of non-essential items across the state, including in red-zones. Shops, malls, industries though not allowed to function in red zone will be permitted to raise their shutters from 9 am to 5pm only for upkeep and maintenance and for premonsoon protection activities of property and goods. Other commercial or production activities are barred.