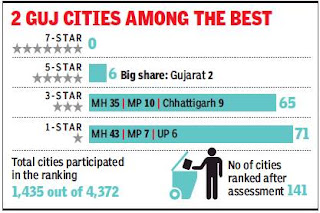 Ambikapur in Chhattisgarh, Rajkot and Surat in Gujarat, Mysuru in Karnataka, Indore in MP and Navi Mumbai have been ranked as top six garbage-free cities out of 1,435 municipalities which participated in first such national-level ranking exercise by the housing and urban affairs ministry.

Municipal areas from Maharashtra had the giant’s share in the rankings under four categories — one, three, five and seven star. Out of 141 cities which qualified for ranking, 79 were from Maharashtra. No municipal area could qualify for the seven-star rating.

The municipal areas have been ranked on the parameters of managing their solid waste which includes collection, segregation and processing. “We want our urban areas to get that seven-star ranking. But we are happy if more and more cities get the one-star and three-star ranking. That will show that a beginning has been made,” Puri said.

Union urban affairs secretary Durga Shankar Mishra said while 1,435 municipal areas had participated in the ranking, only 141 were ranked after carrying out assessments, including spot visits.

Overall, 65 cities have bagged three-star rating and 70 have got one-star among the total of 1435 cities that applied. The areas which got three-star rankings included Tirupati, Vijayawada, Chandigarh, Bhilai Nagar, Ahmedabad and Gandhinagar .

The star rating protocol was launched by the ministry under Swachh Bharat Mission in 2018 to institutionalise a mechanism for cities to achieve garbage-free status. The protocol included cleanliness of drains and water bodies, plastic waste management and managing construction and demolition waste. Officials said while the key thrust of this protocol is on solid waste management, it also takes care of ensuring certain minimum standards of sanitation.