SC asks States to Pay Migrants’ Train Fare; Ensure Food, Shelter to Those on the Move 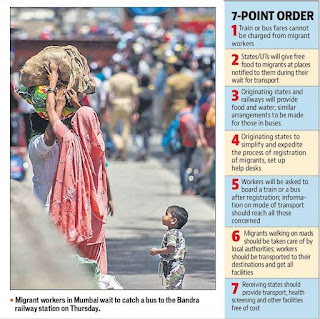 The Supreme Court ordered states to ensure free food and shelter to migrant labourers and pay for the train fare of those returning home, in an interim order aimed at easing the plight of migrants stranded due to the lockdown.

The home and host states of the migrants must share the train fares, and the railways provide them food and water on the trains, the court ordered. It asked states to provide them food and shelter wherever they were, register them and indicate a waiting time to transport them home so that they do not start walking back to their homes.

The court pointed out several lapses in the government response to the migrants’ problem, even as solicitor general Tushar Mehta said the central and state governments were “working tirelessly” to deal with those and accused a few “prophets of doom” of highlighting a few “isolated unfortunate” instances.

The bench comprising Justices Ashok Bhushan, Sanjay Kishan Kaul and MR Shah had issued notices to the central government last week, after initially refusing to take up the issue. There were public criticism of the institution’s failure to address the plight of the migrants.

Solicitor general Mehta said though the “isolated unfortunate instances are painful, the central and state governments are doing their best to ensure that such instances do not recur”.

“A microscopic section of our great nation is not only repeatedly highlighting such unfortunate instances”, but also ignoring the government’s efforts to tackle the pandemic and the migration, he said in his written submissions. “… such targeted display of isolated instances should not be permitted to guide the jurisdiction of this court,” he said.

He claimed that though there was a “system in place which was being used by 97-98% of the migrants to register themselves and go back home, some migrant workers, either due to lack of proper information or due to anxiety, or in many cases due to local instigation to leave the urban areas, started walking on the road”.

The top court didn’t accept his prayer, and issued the interim directions while it awaited complete responses from the central and state governments on the steps taken to resolve the problems of the migrants.