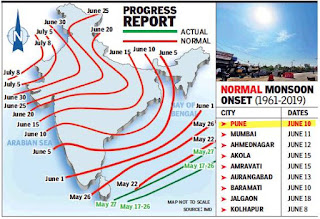 A low pressure system brewing over the western central Arabian Sea has put a question mark over the actual date of the monsoon onset over Kerala during the next few days.

The India Meteorological Department had earlier forecast June 5 as the date for the onset over Kerala as against the normal June 1. But the low pressure system over the Arabian Sea could either delay or expedite the onset.

IMD scientists on Wednesday said the advance of the monsoon over Kerala would depend on the intensity (whether it converts into a cyclonic storm or not) and movement of the low pressure system over the Arabian Sea.

The Arabian Sea usually witnesses one cyclone per year. But in 2019, the sea contributed five out of the eight cyclonic storms formed over Indian seas.

The scientists said they were still monitoring the system and it could take a few days to draw conclusions over the actual monsoon onset date. Mrutyunjay Mohapatra, Director General of Meteorology, IMD, said, “The long range forecast on the monsoon onset had indicated onset over Kerala on June 5, with a model error of plus or minus four days.”

“The effect of super cyclone Amphan has fizzled out and we expect a low pressure system over the Arabian Sea. Though it is expected to strengthen the monsoon, its advancement will depend on the direction and movement of that low pressure system over the Arabian Sea. If the system forms very close to coast and moves northward, it will help the monsoon. But if it forms away from the coast and moves northwestward towards Oman or Yemen, it may not help,” said Mohapatra.

Anupam Kashyapi, head of weather, IMD, Pune, said the low pressure system was likely to form over the west central and adjoining southwest Arabian Sea around May 29. “It is likely to concentrate into a depression during the next 48 hours, while numerical weather prediction models are indicating that it may move northward over the Arabian Sea. Another cyclonic circulation is over southwest Bay of Bengal off Sri Lanka coast,” he said.