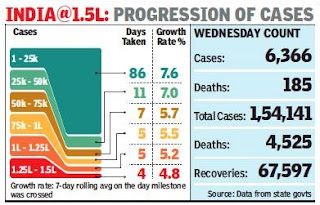 India crossed the grim milestone of 1.5 lakh Covid-19 cases by registering 6,366 fresh cases on Wednesday, taking the country’s total caseload to 1,54,141. While it took 109 days to breach the mark of one lakh cases, it took just nine days to cross the level of the next 50,000 cases, indicating a huge spurt in fresh cases.

Maharashtra continues to contribute a major chunk of these, adding 2,190 fresh patients, or more than one-third of the nation’s cases on Wednesday. With total 56,948 cases, it alone accounts for nearly 37% of India’s caseload. With 105 casualties, Maharashtra also became the first in India to register triple digit deaths in a single day, taking the state’s cumulative toll to 1,897 and the nation’s to 4,525. Nearly 57% of India’s 185 casualties recorded on Wednesday came from Maharashtra. India’s casualties on Wednesday are the second highest after the record 199 registered on May 5.

In another positive development, 67,597 or nearly 44% of the patients have recovered across the country.

After Maharashtra, Tamil Nadu reported the highest caseload, 817, while both Delhi and Gujarat crossed the 15,000-mark on Wednesday. With a record 792 new cases in a day, Delhi’s total cases stood at 15,257 while with 376 fresh patients, Gujarat’s cumulative cases stood at 15,205.

After Maharashtra, Gujarat saw maximum deaths at 23, taking the state’s toll to 938. Key sources in the state government said a fifth lockdown for 2-3 weeks is very likely.

Delhi saw 15 deaths, MP eight and TN, Bengal and Telangana six each. UP crossed the 7,000-mark after recording 269 cases, taking its caseload to 7026. The state reported five deaths, taking the toll to 177.

With 134 fresh cases, Andhra Pradesh registered the highest single-day surge in either of the two Telugu states, taking the coastal state’s caseload to 3,117.