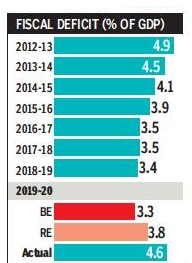 The Centre’s fiscal deficit ballooned to 4.6% of the GDP during the last financial year, mainly on account of a near 10% shortfall in the scaled down revenue target, while spending was scaled down marginally as several ministries could not spend their revised allocation.

The fiscal deficit numbers released by the Controller General of Accounts were higher than the revised estimate of 3.8% of GDP released by the government when the Budget was presented on February 1 and is the highest since the 4.9% recorded in 2012-13.

While the lockdown in March resulted in a slowdown in economic activity and tax revenue, the government’s decision to extend the tax payment deadline also contributed to muted inflows into the treasury.

But if March was bad, the situation was worse in April where the Centre’s tax revenue when collections were estimated at Rs 67,557 crore, over 44% lower than a year ago.