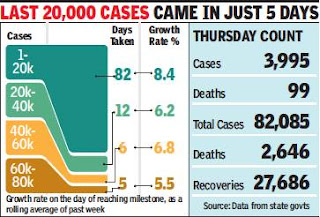 In the biggest surge in Covid-19 infections in Delhi, 472 people tested positive on Thursday, even as India’s total caseload crossed 80,000 with 3,995 fresh cases reported, the second-highest rise in a day.

While this was the fifth consecutive day of over 3,500 cases being added to the country’s Covid count, the growth rate of the infection has gradually decreased in this period. However, the infection continues to spiral in several states like Madhya Pradesh (314 new cases), Rajasthan (206) as well as many eastern states witnessing a return of migrant workers.

Kerala too reported 26 new cases on Thursday, its biggest surge since the end of March. Meanwhile, Tamil Nadu overtook Gujarat as the state with the second highest count of Covid cases.

However, the number infections were gradually decreasing in the both states, with Tamil Nadu for the first time in many days reporting less than 500 cases on Thursday (447), and Gujarat registering 324.

The total number of coronavirus in the country stood at 82,085, as per reports from state governments. The death toll, however, fell to double digits after two days, with 99 fatalities reported on Thursday.

In Delhi, the total count reached 8,470. With nine fresh deaths, the death toll in the state has climbed to 115. “The doubling rate of cases in Delhi is 11-12 days. We would be in a more comfortable position if it is 20 or more,” Delhi health minister Satyendar Jain said.