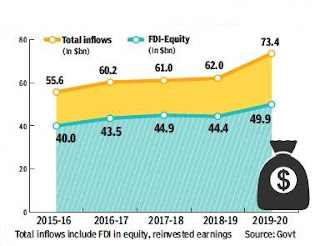 India’s FDI inflows, including reinvested earnings, rose 18% to a record $73.5 billion during 2019-20, buoyed by a spurt in inflows into computer hardware & software, telecom, and hotel & tourism, while services, the traditional mainstay, witnessed a decline.

Excluding reinvested earnings, inflows were 14% higher at just a shade under $50 billion, which is also an all-time high. In fact, the large flows acted as a counterweight to low FII inflows during the year, which were estimated at $247 million (on a net basis) during the last financial year.

The data naturally led to some celebration in government, given the overall gloomy economic situation and weak domestic investment. “In another strong vote of confidence in Make in India, total FDI into India grew 18% in 2019-20 to reach $73 billion. Total FDI has doubled from 13-14 when it was only $36 billion. This long-term investment will spur job creation,” commerce and industry minister Piyush Goyal tweeted.

The year saw several large deals, involving overseas, with large inflows expected during the current year as well, with Reliance Jio alone announcing several transactions so far. Besides, some of the earlier announcements such as Saudi Aramco’s stake acquisition in Reliance Industries and Brookfield’s proposed investment in the tower arm are pending.

While Maharashtra remained the top destination for overseas investors, Karnataka came second, although data for the October-March period was released by the department for promotion of industry and internal trade.

In terms of the countries, Singapore remained the top source for the second straight year, although inflows from the island nation dropped almost 10% to $14.7 billion. Mauritius was a distant second with investments of $8.2 billion routed via India’s close ally, with a sharp spike seen from the Netherlands, with inflows rising 1.7 times to $6.5 billion.