Tragedy on the tracks 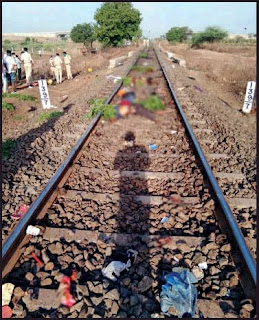 Sixteen migrant workers sleeping on rail tracks while returning to Madhya Pradesh were crushed to death by a goods train in Aurangabad district of Maharashtra on Friday, police said.

The Railways have announced a comprehensive probe into the accident, which took place at 5.15 am near Karmad, around 30 km from Aurangabad. A viral video clip from the scene of the tragedy shows the bodies of migrant workers lying on the tracks and nearby with their meagre personal belongings scattered around.

District police chief Mokshada Patil said that three of the four survivors had tried in vain to wake up their colleagues who had slept on the track after an overnight walk from Jalna, around 40 km from the accident spot.

The workers, walking to Bhusawal from Jalna along rail tracks, were returning to their home state Madhya Pradesh, an official at the Karmad police station said. They were sleeping on rail tracks due to exhaustion when they were run over by the goods train coming from Jalna, he said.

“The labourers, working in a steel factory in Jalna, left for their home state on foot last night. They came till Karmad and slept off on the tracks as they were tired,” another police official said. Three of the four survivors were sleeping some distance away from the rail tracks, police said.

The migrant workers, rendered jobless due to the coronavirus-enforced lockdown and desperate to go to their native places, were walking along the rail tracks apparently to escape police attention.

The survivors had frantically raised alarm to alert their group members sleeping on tracks about the approaching freight train, police said.

Chief Commissioner of Railway Safety Shailesh Pathak wrote to the Railway Board Chairman, calling for abundant caution and requesting him to issue instructions to ensure that such an accident does not recur. The Commission of Railway Safety, which investigates all serious rail accidents and clears all rail projects, also said that now that such an incident of migrant or other persons walking along the tracks leading to consequent deaths have come to notice, all-out efforts must be made to prevent recurrence of such incidents in future.

Terming Friday’s deaths “painful”, Maharashtra Deputy Chief Minister Ajit Pawar urged labourers to have patience and not undertake risky journeys to their home states. “It is disturbing to see how desperate migrant workers in Maharashtra are to return to their home states,” Pawar said in a statement. Pawar, who is also the state’s Finance Minister, said the Maharashtra government was working on war footing to send migrant workers to their native states with cooperation from the Centre and other states. “Workers should wait till their turn comes and arrangements are made (to ensure their return). They should not risk their lives travelling in an unsafe manner,” he said, adding that everyone will be able to return home in phases and there was no need to hurry, as the state government had arranged for food, water, accommodation and medical facilities of 6.5 lakh migrant workers.