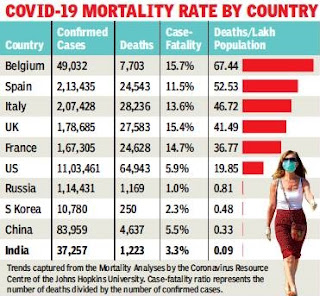 India’s fatality rate of 3.3% of total confirmed coronavirus cases and deaths of 0.09 people per one lakh population compares well with some other countries, including South Korea, which is seen as a top performer in containing the disease and China that resorted to measures like mass quarantine to limit the pandemic.

Among the early countries to have been infected with the outbreak of Covid-19, South Korea has done well by confining its total count to 10,780 cases and deaths at 250.

Its case-fatality rate is among the lowest at 2.3% while deaths per lakh of population have been at 0.48, higher than China at 0.33 and India’s 0.09, which is the lowest among all major countries, according to trends captured at the Coronavirus Resource Centre, Johns Hopkins University.

The situation is very grim in some European countries and the US. Deaths per lakh of population due to Covid-19 has been the highest in Belgium at 67.44, followed by Spain, Italy, UK, France and US at 53, 47, 42, 37 and 20 respectively.