Why Maharashtra was not able to check rapid Covid-19 spread

As of Wednesday, May 13, Maharashtra’s mortality rate stood at 3.76%, a significant improvement from the first few days of April, but still above the national average of 3.23%. If Maharashtra is excluded from the national data, India would have 49,912 cases and 1477 deaths on May 13, bringing the mortality rate further down to 2.96%. The global mortality rate, according to data on worldometers.info, is 6.72% (6 pm, May 13). 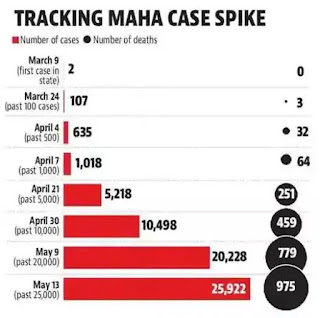 What exactly went wrong in Maharashtra’s case? Why does one of India’s most industrialised and prosperous states have both the most number of Covid-19 cases as well as deaths? The answer perhaps lies in what the state did not do in January and February right up to March 9, when the first two Covid-19 cases were detected in Maharashtra. Dr. Avinash Bhondwe, president of Indian Medical Association, Maharashtra, laid the blame on travellers returning from the United Arab Emirates for the initial spurt in cases. “In Maharashtra, more than 40% of the infections were owing to travellers who returned from the UAE,” he said. “Even though Maharashtra’s first case was of a Dubai returnee, the state government waited for 10 days to start screening travellers from the UAE. This was a major loophole in the screening process.”

Indian airports began universal screening only in the third week of March. By then, on average, 42,000 international travellers landed in Mumbai every day. On March 22, India banned all domestic and international passenger flights to and from Indian airports. “By then, it was too late,” said a Maharashtra state health department official, who wished to remain anonymous. “We had thousands of fliers coming into Mumbai every single day and only a handful of them were screened for symptoms. What we cannot know for certain is the number of asymptomatic patients from the United States, the United Kingdom, Singapore and other south-east Asian countries that may have passed through Mumbai international airport between February and March 22.”

Dr Bharat Purandare, infectious diseases expert, Deenanath Mangeshkar Hospital, Pune, said, “In retrospect, we can say that the government should have made universal screening of all passengers mandatory much earlier. Also, we should have stopped international flights in the first week of March.”

A month after the first case was detected, Maharashtra was testing at 290 per million population. Since then, the state has improved its testing rate on May 13 to 1892 per million population. Gujarat tests at 1760 per million and Tamil Nadu is at 3523 per million (all data according to respective state health departments). The trouble with Mumbai, which now accounts for a fifth of all cases in the country, though, is that its detection rate over the last few days has risen to 33%. Which means that, for every 100 persons tested, 33 are detected with Covid-19.

Civic officials said that this was due to the change in testing protocol targeted at containment zones. Additional municipal commissioner, Suresh Kakani said, “Detection rate is increasing because of the increased number of testing samples per day. Often, pending test results were added to a particular day’s count. Hence it did not give us clarity. If we calculated the detection rate against 124,000 samples tested with 14,521 positive cases, then the detection rate remains 11.71%. This figure is higher than the state and national average because of targeted testing conducted by BMC in containment zones.” The national average is 4.3% and Maharashtra’s average is 7%.

Civic officials said Mumbai’s high number is primarily because of aggressive testing of high-risk contacts. Moreover, state and BMC health officials blamed the lack of physical distancing in Mumbai’s most densely populated areas for the cluster spread. “Eight out of Mumbai’s 24 wards account for more than 50% of the city’s cases,” a senior civic official said. “These are among the most densely populated areas. Worli Koliwada, Dharavi, Kurla, Byculla, Saki Naka, and Andheri (West) are areas where the population density is anywhere between twice to 10 times that of Mumbai’s average.” According to United Nations population data for July 2019, Mumbai’s population density is 32,303 per square km. Dharavi, India’s largest slum, has nearly 1000 cases. Its population density is 354,166 people per square km, according to BMC population data.