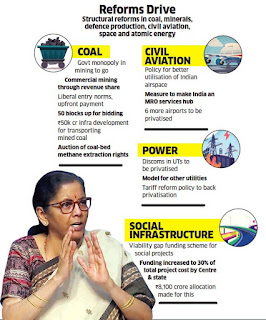 Finance Minister Nirmala Sitharaman unveiled a slew of steps to spur investments, including relaxation of foreign direct investment limit in defence, privatisation of six more airports, and fully opening up coal mining to the private sector, in the fourth instalment of an expansive economic stimulus package to offset the impact of the Covid-19 outbreak.

FDI limit in defence production through automatic route (meaning specific approvals are not needed) has been increased to 74% from 49%, while private sector participation has been allowed in space exploration as part of structural reforms that were announced for a variety of sectors including mineral mining, civil aviation and atomic energy.

A fast-track mechanism — empowered group of secretaries — for expeditious clearance of investment proposals has been set up, and each ministry will have a project development cell to prepare investible projects, minister said. The Centre would carry out a significant uplift of industrial infrastructure in states after ranking all 3,376 industrial parks and special economic zones with 5 lakh hectares or more of land.

The government will come out with incentive schemes for promotion of sectors such as solar PV manufacturing and advanced cell battery storage.

The first three instalments of the stimulus programme announced earlier this week comprised schemes worth a total of ₹9.9 lakh crore.

Together with Saturday’s ₹58,000 crore worth of measures, the ₹1.7 lakh crore package announced by the government in April and ₹5.24 lakh crore support by the Reserve Bank of India, the measures add up to a total ₹17.42 lakh crore, leaving a balance of ₹2.58 lakh crore.

The aviation package includes measures for better airspace management across the country and those aimed at making India a maintenance, repair and overhaul hub, and privatisation of government airports. “Today, only 60% of the airspace is available for commercial flights and discussions will happen to ensure that more airspace is made available to commercial flights, which will not just reduce travel time between two destinations but also reduce cost of operations for the airlines,” Sitharaman said. The government will also privatise six more airports.

Responding to a question about whether there will be a separate package for private airlines, Sitharaman said it will be announced at a later stage, if at all.

The aviation industry was disappointed as it was expecting some sort of financial support. “(We were expecting) government-backed credit lines or loans to get back on our feet and sustain losses while demand recovers and waiver of all statutory dues for six months to allow airlines to rebuild their balance sheet,” said an airline industry official. “Now we can almost certainly say two or three airlines will not survive.”

There will not be any distinction between captive and non-captive mineral mines to allow transfer of mining leases and sale of surplus unused minerals. About 500 mineral mines will be auctioned, FM said.

She said the privatisation of discoms in Union territories will provide a model for emulation by other utilities across the country. “It will lead to better services to consumers and improvement in operational and financial efficiency in distribution,” Sitharaman said. 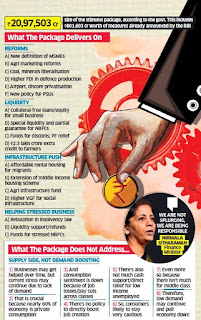