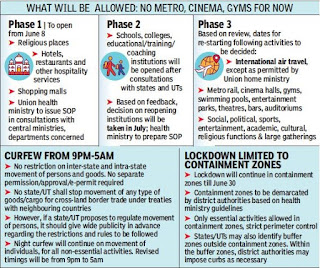 In keeping with the increasing easing of the lockdown, the Centre set out a three-phase "unlock" plan that will restrict curbs to containment zones and permit reopening of malls, hotels and restaurants, inter-state travel and religious places in keeping with rules to be issued by the health ministry.

The MHA sought to underline the shrinking footprint of the lockdown, calling the latest guidelines "unlock 1" and saying "...they will have an economic focus. The new guidelines have been issued based on extensive consultations with states and UTs." The night curfew has been retained, with a shortened period of 9 pm-5 am instead of the previous 7 pm-7 am routine where movement for non-essential reasons is banned.

As Lockdown 4.0 ends, the limiting of curbs to containment zones where only essential services will be allowed, even though the daily count of cases is growing, reflects the Centre's assessment that the Covid curve is not assuming runaway proportions and can be managed with a focus on hotspots. It is also felt that so far the increase in number of cases due to the return of migrants to the hinterland is not unmanageable and can be monitored.

While shopping malls and eateries can open after June 8, no date has been specified for reopening of international travel, metro rail, gyms, swimming pools, bars, theatres and places of public assembly. Religious, social and political congregations are also banned. Decisions on these activities will await a more detailed assessment of the health situation and the trends regarding the prevalence of the disease in Indian and abroad.

A call will be taken in July, based on consultations with the states, and also discussions the states themselves will conduct, with regard to schools, colleges, coaching and training institutions. Stakeholders such as parents are also to be consulted. Rules will be drawn up by the health ministry and the NCERT is also working to guidelines that aim to ensure social distancing and hygiene in educational institutions. As far as containment zones are concerned, the lockdown stands extended until June 30.

However, the individual states and UTs, based on their own assessment, will be free to prohibit certain activities outside containment zones or impose curbs as they feel necessary. Even where it comes to inter-state travel, states can, for reasons of public health, impose restrictions as is now the case for travel between Ghaziabad-Delhi and Gurgaon-Delhi.

Night curfew, though reduced, has been retained, as the Centre felt reducing movement from late evening to dawn will be useful in keeping people indoors. Though the 9 pm-5am period does not see a large number of people on the move, it will be a disincentive to non-essential movement.

In areas outside containment zones, all activities will be allowed from June 1 except a few that will be opened phase wise, subject to standard operating procedures. “Phase III activities (international travel, metro, gyms, religious and political congregations) can resume anytime as per assessment of the situation,” an senior government official said but added that it was difficult to immediately specify at what intervals such assessments may be taken.

There will be no restrictions on inter-state and intra-state movement of persons and goods in non-containment zones, and no separate permission or e-permit will be required except for specified reasons.