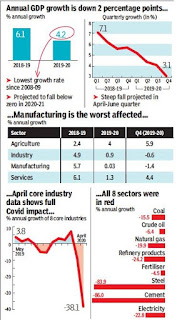 Output of eight core sector industries plunged 38.1% in April — probably the steepest ever — led by an over 80% slump in cement and steel production due to the nationwide lockdown.

Prominent sectors such as automobiles saw zero sales and production during April. Trade data released earlier in the month showed that exports and imports had both declined by nearly 60% each as factories were forced to shut down to avoid spread of the virus.

Other indicators, such as energy consumption and transportation of goods, too, point to a massive slump. For instance, the core sector data released on Friday showed that coal production dropped by 15.5%, while natural gas output was almost 20% lower. Similarly, electricity generation was down nearly 23% and refinery output fell over 24%.

Although none of the eight core sectors managed to see a higher production in April, the decline was led by an 86% fall in cement output, followed by an 84% decrease in steel. Crude oil (-6.4%) and fertliser (-4.5%) were the only two sectors that witnessed single-digit drop.

Economists and market players expect the core sector numbers to impact the overall GDP in the first quarter.

Agencies such as Goldman Sachs predicted a 45% contraction in the GDP during the April-June quarter. On Friday, Motilal Oswal said it expected real GDP to decline by around 21% during the current quarter. Last week, the RBI said the Indian economy is headed for its first decline in GDP in four decades but refused to give an estimate. The government, however, refrained from giving any projection, arguing that full impact is not clear at the moment.

During May, factories have taken baby steps towards resumption but a majority are working at only a fraction of their capacity, with several parts of the country still closed for business. Data available with the commerce department points to an improvement almost on a weekly basis. For instance, exports, which were down around 40% a couple of weeks ago are now 35% lower on a year-on-year basis.