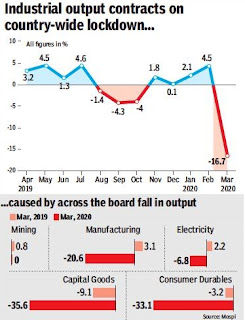 India's industrial output contracted by a record 16.7% in March, dragged down by a sharp slide in the manufacturing sector as the initial impact of the Covid-19 virus dealt a devastating blow, prompting economists to say that the RBI will have to cut rates to help revive the sector. Data released by the National Statistical Office showed the index of industrial production contracted an annual 16.7% compared to 2.7% expansion in the year-ago month. This is the sharpest contraction in nearly 39 years, if you include data from all the series back to 1981. All the different series data cannot be compared, but Tuesday’s numbers highlight the pain that the sector has faced due to the impact of the virus.

For the full year, industrial output contracted 0.7%. Economists said the April data will be worse, given the full impact of the lockdown will be evident in the numbers that will be published in June. The manufacturing sector bore the brunt of the virus impact, contracting 20.6% during March compared to an expansion of 3.1% during the year-earlier period.

Prime Minister Narendra Modi on Tuesday unveiled a Rs.20-lakh-crore package to provide relief to the sectors hit by the impact of the pandemic. This includes measures unveiled by the finance ministry and the RBI earlier to support the poor, NBFCs, banks and the financial markets.

The NSO also released sectoral data for retail inflation but did not publish the overall numbers for April due to the disruption in data collection as a result of lockdown. The NSO revised downwards the March number to 5.8% from the earlier 5.9%. The limited data showed an uptick in food prices.