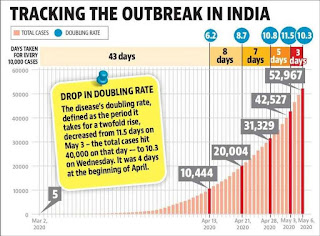 However, at 93, the death toll on Wednesday was less than half of the 199 casualties recorded across the country the previous day. Maharashtra alone accounts for 36.6% of the total 1777 casualties in India so far.

Delhi recorded its maximum number of cases in a day (428), pushing its count to 5,532. With one more death, the toll in the national capital now is 65.