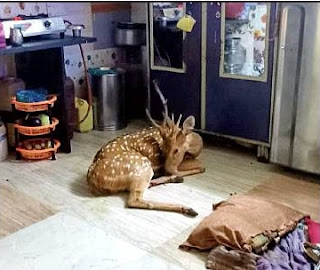 A deer came crashing through the roof of a house in Powai on Saturday night. It tried to stand, but kept tripping. The deer was finally rescued and sent to Sanjay Gandhi National Park.

Two brothers, who live in the chawl room, were watching TV after dinner on Saturday when the deer landed on the floor,” said Santosh Bagane from the Rapid Rescue Team. He added that the deer was possibly chased by a dog or even a leopard atop a hillock adjacent to the chawl.

The deer tried to find a place to hide in the room, said Joaquim Naik of Resqink Association for Wildlife Welfare. A rescue net was used to get it out of the room, said Pawan Sharma. It is recuperating at SGNP.