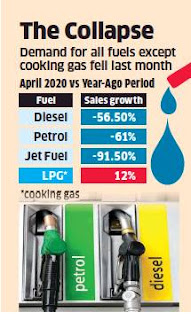 Petrol and diesel sales by state firms dropped by a record 61% and 56.5%, respectively, in April from a year earlier but an improvement in demand in the second half of the month signalled the worst was probably over, industry executives said.

Fuel sales have crashed as the nationwide lockdown has kept most people indoors, vehicles off the roads, planes grounded and factories silent. The lockdown’s partial easing since April 20 slightly improved fuel demand as the government permitted some economic activity and eased mobility restrictions, executives said.

Jet fuel sales dropped 91.5% in April, slightly better than 94% drop witnessed in the first half, as increased cargo flights and rescue missions used up some fuel. The sales data is for state-run companies, which control about 90% of the domestic market.

By contrast, the sale of cooking gas, or liquefied petroleum gas, which had risen by 21% in the first half of April moderated in the second half. For the full month of April, its sales expanded 12% from a year earlier mainly on increased customer base. The demand spike witnessed at the beginning of the lockdown period has faded and the sales growth returned to normal, an executive said, adding that there are no more panic bookings.

Executives expect fuel sales to rise in May if the lockdown is eased further.