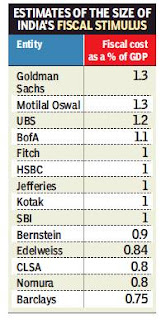 The government has announced a five-part package and has provided details of how it adds up to Rs.20.97 lakh crore and accounts for nearly 10% of the gross domestic product.

FM Nirmala Sitharaman has said that the package includes the liquidity measures announced by the RBI and the PM Garib Kalyan Yojana, which the finance ministry unveiled as soon as the national lockdown was ordered.

But over a dozen banks, brokerages and ratings agencies have said the package falls short of 10% of GDP and works out to around 1% and may not be enough to address the large-scale devastation inflicted by the pandemic across crucial sectors of the economy. “The Indian government’s Covid-19 package will not have a major fiscal and economic impact, despite the government’s claim of it’s ‘10% of GDP’ size,” said a report from Fitch Solutions Country Risk and Industry Research (a unit of Fitch Group). “India’s package includes previously announced measures and also monetary stimulus, making the actual fiscal impact of the additional stimulus only about 1% of GDP, according to our estimates,” the report said.

Similarly, Moody’s Investors Service said the measures announced by the government for financial institutions as part of the Rs.20-lakh-crore economic package will help ease their asset risk, but will not fully offset the negative impact from the Covid-19 outbreak.

SBI’s research wing said the package does not do much to boost consumption in the shortterm and that could act as a drag on growth. “The final tranche of Rs 20-lakh-crore package was announced (on Sunday), of which measures amounting to 4% of GDP have been undertaken by the RBI. The direct fiscal impact of the reforms, however, comes to around Rs 2 lakh crore (1% of GDP),” Soumya Kanti Ghosh, group chief economic adviser at SBI, said.

Finance ministry officials have defended the inclusion of liquidity measures announced by the RBI in its package, saying it is in line with global practices and several countries, which have announced large stimuli, have also included the measures taken by their respective central banks.

“However, looking at the breakdown, the liquidity support and credit guarantee measures accounted for nearly three-fourths of the economic support package, followed by monetary measures at 15% and fiscal support at only 10%. The upfront direct fiscal cost this year from the Covid-19 support package announced so far is quite limited (1.2% of GDP),” Tanvee Gupta Jain, economist at UBS Securities India said in a report.