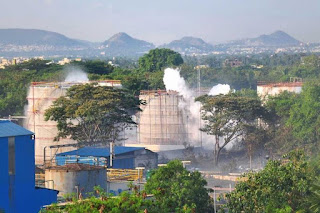 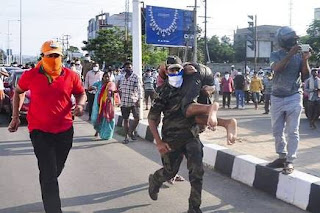 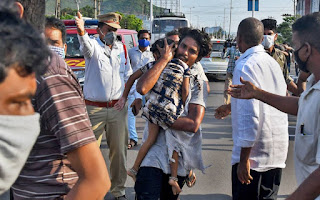 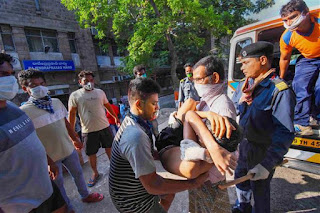 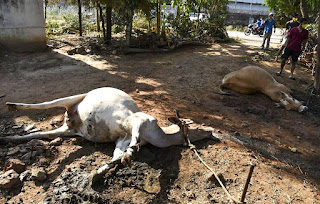 Eleven people died and at least 316 have been hospitalised after a gas leaked from a styrene unit in Andhra Pradesh’s Visakhapatnam.

South Korea-headquartered LG Polymers Pvt Ltd located at RR Venkatapuram village was preparing to reopen after being shut for 44 days due to the nationwide lockdown, when the incident took place.

The leak was reported in the early hours of Thursday. The impact zone spanned almost three kilometres and at least five villages in the vicinity of the plant have been affected.

Among the dead are two children, aged six and nine, a first-year medical student and a man who fell into a canal after being blinded by the toxic vapours.

Disturbing scenes were reported by eyewitnesses who say that scores lay on the roads either unconscious or desperately gasping for breath as they tried to unsuccessful flee to safety. Parents were seen carrying unconscious children in their arms rushing to get medical help, bringing back grim memories of the 1984 Bhopal gas tragedy. Many others were seen sitting dazed and disoriented on the pavements.

Authorities have evacuated over 15,000 people from the affected villages. Relief teams even had to break down doors to rescue those who lost consciousness in their sleep. A large number of animals and birds also lost their lives in the incident.

Taking stock of the situation, Prime Minister Narendra Modi said he had spoken to officials of the Ministry of Home Affairs and the National Disaster Management Authority.

“I pray for everyone's safety and well-being in Visakhapatnam,” Modi said in a tweet.

Addressing a joint press conference in Delhi in the afternoon National Disaster Response Force and NDMA officials said NDRF Director General S N Pradhan said NDRF personnel would be at the spot till it is totally plugged.

Andhra Pradesh Chief Minister Y S Jaganmohan Reddy has ordered a probe into the matter. The state has also announced a compensation of Rs.1 crore for the kin of the deceased.

Though the source of the leak was contained in the morning, the effects were seen for many hours after. Daybreak revealed the full magnitude of the tragedy.

Many people complained of itchy eyes, rashes , fatigue, nausea and dizziness. More than 60 affected persons are on ventilator support at the state-run King George hospital.

The infrastructure put in place to fight the novel coronavirus pandemic, the preparations made, and the alertness established in the machinery of cross section of departments saved the day for the authorities who were able to contain the situation in a matter of hours.

The gas leak reportedly began at around 3.45 am and the officials were informed at around 4.30 am. City Police commissioner RK Meena, district collector Naveenchand and other officials were at the spot by 5 am when the rescue operations were underway. As ambulances rushed the affected persons to different hospitals based on the severity of their condition, police vans were going around villages calling upon people to vacate their houses and move to safer places.

An official said the entire rescue operation was completed in two hours, much earlier than the time it would have taken in any other situation.

The evacuees have been accommodated in cottages and function halls belonging to the famous Simhachalam temple.

Fire tenders from Hindustan Petroleum Corporation Ltd were called to reduce the impact of the gas with the help of water.

In a statement, LG Polymers said, “We are currently assessing the extent of the damage on residents in the town and are taking all necessary measures to protect residents and employees in collaboration with related organizations”.

A company spokesman in Seoul said that a night-shift maintenance worker had discovered the leak from a tank. The cause of the leak is being investigated, the spokesman added.