Azim Premji to hang up boots 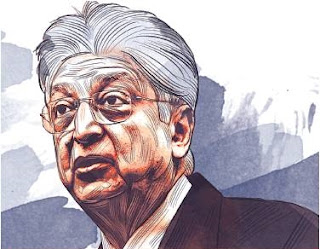 Wipro founder Azim Premji will step down in July from the company he built over five decades into one of the country’s largest technology services firms and devote more of his attention to philanthropic initiatives.

“It has been a long and satisfying journey for me,” said Premji. “As I look into the future, I plan to devote more time to focus on our philanthropic activities.”

Premji has been one of the most generous donors among India’s industrialists. In March, he pledged 34% of his Wipro shares to Azim Premji Foundation, a philanthropic initiative focussed primarily on education, taking the total commitment to the organisation to 67% of his wealth, or ₹1.45 lakh crore. The foundation set up the Azim Premji University as a not-for-profit venture in 2010. The Premji family holds a 74% stake in the software exporter.

“Wipro was started by my father Hasham Premji. I think where I contributed was to expand the existing product range and diversification,” the normally reticent Premji said in an interaction with students two years ago.

Premji said, “What inspired me was a mission to do better than what we were doing in the past and grow much faster than how we grew in the past.”

In 1966, Premji dropped out from college in Stanford at the age of 21 to return to India after his father’s death to take over Wipro, originally Western India Vegetable Products, which had edible oil as its main product and was based in Amalner in Maharashtra. Premji diversified the business and focussed on building a technology venture, both hardware and software. The latter would thrive as the former dwindled. The software services business, which has been seeking to recover lost ground in recent years, generated $8.5 billion in annual revenue last year.

Premji will remain chairman of Wipro Enterprises and continue to chair the board of Wipro-GE Healthcare.

As he built Wipro, Premji like his contemporary NR Narayana Murthy, who co-founded Infosys, was active in raising issues of governance and infrastructure. He also worked with the industry leaders to highlight issues concerning the software and hardware industry.

At the same time, people who have worked with Premji swear by his integrity and his passion to build a culture that focusses on giving back to society, like his first hire in the tech business.