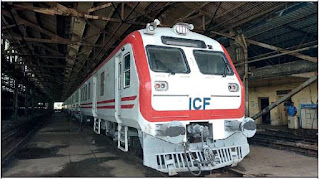 A Mainline Electric Multiple Unit train prototype, constructed by Integral Coach Factory, Chennai, has arrived in the city for trials.

After successful trials, a similar MEMU train is likely to be introduced on intercity routes including Mumbai-Pune and Mumbai-Nashik, after approval from the ministry of Railways. The ₹26-crore worth train, after completion of the trials, will operate on the Northern railway in accordance with the Railway ministry’s plan.

The prototype MEMU train has features similar to Train18 or Vande Bharat Express. All electrics on the train are situated on the underslung, that would allow accommodation of additional passengers. The train has eight compartments and an emergency talk-back button, emergency push button, closed circuit televisions cameras and global position system based on passenger information system.

The train, which has a maximum attaining speed of 130 kmph, has been parked in Kalwa railway car shed of the Central Railway and will soon undergo trails by the Research Design Standard Organisation. Presently, the operational MEMU trains operate with a maximum speed of 110 kmph.

“The trials, which will be done on Central Railway (CR), is chosen by RDSO as the tracks have curvatures and gradients that can test the train’s brakes,” said a senior central railway official.