The PM's A team 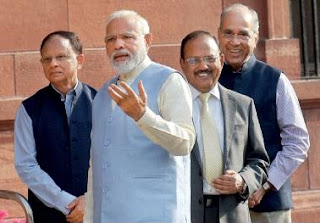 The 1967 IAS officer has been retained as the top official in PMO, the elevation to the Cabinet rank being a recognition of the efficiency that defined the office as it pushed for implementation of Prime Minister Narendra Modi’s favourite schemes. Misra, who is a key link between PMO and ministries as well as state governments, goaded the bureaucracy to raise its game. An alumnus of Harvard’s Kennedy School of Government and Allahabad University, the UP cadre officer has insights into the complexities of politics as well as, thanks to the stints at the Centre, familiarity with the functioning of economic ministries. The former chairman of Telecom Regulatory Authority of India is seen as a safe and steady pair of hands

The 1972 batch Gujarat cadre IAS officer, who too has been retained in his post with an elevation to the Cabinet rank, also played an important role in policy issues and oversaw shortlisting and selection of candidates for several high-level appointments. He has been involved in administrative reforms and coordination with the cabinet secretariat. Known as a man who shuns he limelight, Mishra served as a link between PMO and the bureaucracy. The former Union agriculture secretary chaired panels tasked with review of disaster management Act and working of crop insurance schemes. A PhD in economics, he was also on the international advisory group of the World Bank to prepare a disaster recovery framework at the global level

The 74-year-old retired IPS officer, who served as director of the Intelligence Bureau between 2004-05, retains his important post. As an intelligence officer, he believed in leading by example and volunteered himself for crucial and risky missions in Mizoram and Punjab. As NSA, he brought the same boldness to the job, his risk-taking instincts complementing the PM’s willingness to consider unconventional responses like surgical strikes and Balakot air raid in response to Pakistan-sponsored terrorism. These missions helped project Modi as a strong leader. Doval’s alert superintendence ensured no big terror outrage outside J&K and the North-East. But the 1968 batch Kerala cadre cop, first police officer to be awarded the coveted Kirti Chakra, displayed diplomatic skills during negotiations with China to defuse tensions at Doklam. As backroom interlocutor for Pakistan, he was closely involved in the release of IAF wing commander Varthman Abhinandan