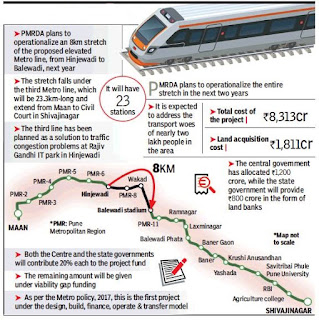 The Pune Metropolitan Region Development Authority plans to operationalise 8 km of the proposed elevated Metro line from Hinjewadi to Balewadi by next year.

The stretch falls under the third Metro line, which is 23.3-km-long, and extends from Maan to Civil Court.

The Rs.8,313-crore project is aimed at addressing the traffic woes faced by nearly 2 lakh IT professionals who work at the Rajiv Gandhi Infotech Park in Hinjewadi.

Officials said the construction will be carried out in two phases. While the Hinjewadi to Balewadi stretch will be operational next year, the one between Balewadi and Civil Court will be taken up in the next phase. There will be 23 stations along the stretch.

PMRDA commissioner Vikram Kumar said the construction work will commence this year after soil testing and signing of the formal agreement with the infra major. “We have set a target to complete the first phase of 8 km by next year. We want to operationalise the entire stretch of 23 km in the next two years,” he said.

The soil testing work for erecting the pillars is expected to start shortly with barricades being put up at Hinjewadi. “The joint working group members from both PMRDA and Tata Realty are expected to submit their report next week,” he added.

Earlier this week, chief minister Devendra Fadnavis took stock of all the major infrastructure projects, including the third Metro line, and asked the PMRDA to speed up the work.

With 90% of land to be handed over to the infrastructure major, the PMRDA has to acquire both private and government lands.

However, the PMRDA commissioner is keen on reducing the acquisition of private properties as they will have to be executed through a direct purchase system. He said both the Central and state governments will have to give up some of their lands along this route to accommodate the Metro.

The authority is hoping to clear the design and start execution before the impending assembly elections so that the work can be continued even when the model code of conduct is in force.

At Hinjewadi, land for the casting yard has been taken on a three-year lease, while talks are on with villagers in Mann to acquire 13 hectares for the construction of a depot.