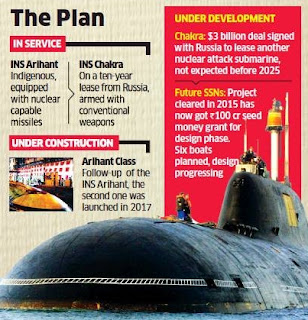 Work has started on the ₹1 lakh crore project to produce next generation nuclear-powered submarines for the Indian Navy, with a defence public sector unit working on a special alloy for the hull. A scale model is likely to be tested soon as part of the design process.

The project to build advanced nuclear submarines designed for long range underwater patrols and armed with conventional weapons has been granted over ₹100 crore seed money by the government for the initial phase with officials predicting a development period that is expected to stretch beyond 2025. The plan to build six nuclear-powered attack submarines kicked off in 2015 when the NDA government gave a go ahead to a long-pending project for the Indian Navy. Then Navy Chief Admiral Sunil Lanba confirmed in 2017 that the project is underway.

Sources said considerable progress has been made in the design phase of the new boats with a scale model likely to be fabricated and tested shortly. These scale model tests will be critical to check development, accuracy and quick success would mean that the Directorate of Naval Design (Submarine Design Group) is on the right track.

Defence Public Sector Unit Mishra Dhatu Nigam is also working on indigenising a new material for the hull that will be designed to dive to depths much beyond the Arihant class of indigenous nuclear-powered and armed submarines. Details of the new, more powerful nuclear reactor, which is being designed for the programme are not yet known.

Sources explained that while lessons learnt from the Arihant build are being incorporated, a totally new material will be used for the SSN project given the unique requirements of the Navy for depth and speed.

The INS Arihant and Chakra – on lease from Russia - are the two nuclear-powered submarines currently in service with the Navy. The second of the Arihant class was launched in 2017 and is in advanced stage of completion. The Arihant class is armed with nuclear capable missiles and is critical to India’s second strike capability. It was reported in March that India and Russia signed a $ 3 billion deal to lease an advanced nuclear attack submarine that will be fitted with indigenous communication systems and sensors. The deal for the submarine – being termed as Chakra III after the first two similar vessels India obtained from Russia – would involve an extensive build programme on mothballed hulls at a Russian shipyard that will be supervised by Indian Navy personnel.