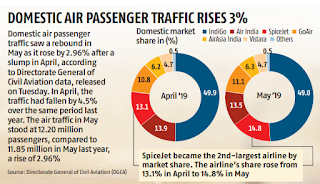 The domestic air traffic witnessed a marginal rebound during the peak traffic season of May, rising nearly 3% year on year after witnessing degrowth of 4.5% in the previous month.

According to analysts, though the situation has eased marginally in May, the improvement last month is nowhere near the scorching 20% per month average growth the industry witnessed over the past five consecutive years. Following the debacle of Jet Airways and grounding of some aircraft by other rival airlines, the capacity constraint led to a rise in airfares, thus keeping the fliers at bay. Fall in the passenger traffic in April was not all of a sudden as there were signs of a slowdown even in the preceding months. In March, passengers carried by the domestic carriers increased marginally by 0.14% and 5.62% in February.

CARE Ratings, in an earlier report on the aviation industry, said that the domestic passenger traffic growth during the year would moderate to lower double digits and higher single digits (8-12%).

Earlier this month, aviation consultancy firm CAPA said that the three Indian carriers, Spicejet, Air Vistara and AirAsia, are accelerating their fleet expansion by 51-66 aircraft, above their original expansion plan for FY20. Of the total fleet expansion plans, SpiceJet alone accounts for 30-40 aircraft.
This will help in restoring the loss of Jet Airway’s capacity by September this year. “Airlines must take advantage of improved conditions to strengthen balance sheets, raise capital and ensure not to squander benefits,” CAPA said further.

Meanwhile, IndiGo maintained its leadership position with a 49% share of the domestic passenger market in May, the DGCA data showed. Rival airline SpiceJet’s market share increased from 13.1% in April to 14.8% in May, thus being placed in the number two position. The market share of Air India, GoAir, AirAsia and Vistara were 13.5%, 11.1%, 6.3%and 4.7%, respectively.