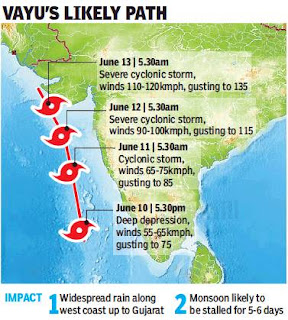 A storm formed over the Arabian Sea near Lakshadweep islands intensified into a deep depression and is likely to strengthen into a severe cyclonic storm by Wednesday.

It will be heading north north-westwards towards Gujarat and bringing widespread rain all along India’s western coast, the met department said.

The storm, gathering strength from a warm sea, had turned into a deep depression on Monday and was set to attain the strength of a cyclone by Tuesday morning, when it will be called cyclone Vayu, a name given by India. The storm will peak on Thursday with winds gusting up to 135 kmph over the sea.

The India Meteorological Department issued an orange alert over cyclone Vayu, indicating that it doesn’t expect the storm to cause much damage on land, but it has warned fishermen from venturing into the sea till June 13.

Since Vayu is moving north from close to India’s southern coast, it is expected to draw moisture away from the monsoon, which will likely remain stalled over the next few days.

Progress of the monsoon seems unlikely till June 15-16 because the cyclone will drag moisture away. It may move a bit through northeast India but major progress isn’t expected in that region too during this period.

The monsoon arrived over Kerala on June 8, a week later than its normal date of June 1. On Monday, it moved to cover most parts of Kerala and some more parts of Tamil Nadu. In the northeast, it has covered most parts of Mizoram and some parts of Manipur.

However, Vayu is expected to bring sweeping rain, with heavy to very heavy showers along the west coast till Friday. Its northward movement is likely to push moist sea winds into north India via Gujarat and Rajasthan, bringing light rain and relief from searing hot temperatures in the region, officials said. Gujarat is where the cyclone may make landfall, if it doesn’t recurve towards Pakistan, could get widespread heavy to very heavy showers at some places on Thursday and Friday.