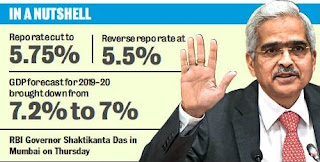 For the third time in a row, the Reserve Bank of India's Monetary Policy Committee cut interest rates by 25 basis points, as was widely expected.

At the end of a three-day MPC meeting, RBI Governor Shaktikanta Das announced its second bi-monthly monetary policy statement for 2019-20. In a unanimous decision, the MPC also decided to change the stance of monetary policy from neutral to accommodative.

Amid slowing economic growth and rising global uncertainty, the RBI had decreased the short-term lending rate (repo rate) by 25 basis points each in its last two policy reviews.

Expressing concern on a sharp slowdown in investment activity along with a continuing moderation in private consumption growth, the MPC said growth impulses have weakened significantly as reflected in a further widening of the output gap compared to the April 2019 policy.

On transmission of rate cuts, RBI noted that the transmission of cumulative reduction of 50 bps in the policy repo rate in February and April this year was 21 bps to the weighted average lending rate on fresh rupee loans.

Inflation expectations of households in the May 2019 round of Reserve Bank’s survey declined by 20 basis points for the three-month ahead horizon compared with the previous round, but remained unchanged for the one-year ahead horizon.

The MPC revised both its growth and inflation forecasts for the current fiscal. GDP Growth has been revised downwards to 7% from the earlier projection of 7.2%. The MPC expects growth in in the range of 6.4-6.7% in the first half of FY20 and 7.2-7.5% in the second half.

The reverse repo rate under the LAF stands adjusted to 5.50%, and the marginal standing facility rate and the Bank Rate to 6%.

The last time the RBI had to cut rates three times in a row was in 2013. 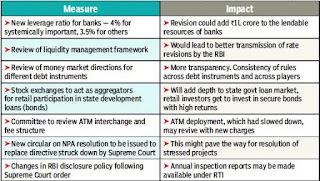