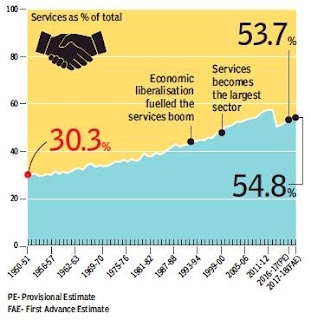 As a poor country develops, labour-intensive manufacturing replaces agriculture as its main economic activity. Services doesn’t become its mainstay until it is fairly advanced.

But India’s growth seems to have bypassed the industrial phase as services became the dominant sector of its economy as early as 1999-2000. Many experts point out this development model has brought GDP growth without sufficient jobs.