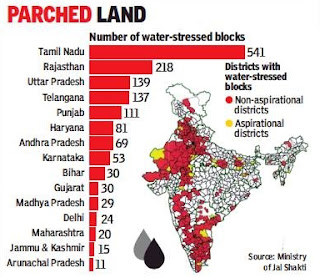 With nearly 29% of total blocks in the country remaining water-stressed, the Centre has decided to stepped up various water harvesting and conservation efforts from July 1. It has appointed 255 dedicated officers of very senior rank and set up 550 teams for the exercise during monsoon and post-monsoon phases in next five months.

The campaign - ‘Jal Shakti Abhiyan’ - will begin on July 1 and continue till November 30 in two phases - July 1 to September 15 (monsoon phase) and October 1 to November 30 (retreating monsoon phase). Though the country has a total of nearly 5,500 blocks, the campaign will be restricted to the water-stressed ones where the problem is compounded due to delayed monsoon and depletion of reservoirs.

Underlining water crisis in 226 districts in the country, even Prime Minister Narendra Modi spoke about his government’s priority to deal with it. Replying to debate in Rajya Sabha on the Motion of Thanks to the President's address, Modi said he was trying to mobilise everyone to tackle this and see how the government could give priority to water in MPLAD funds. “We also have to make society aware on water issues,” he said.

The water-stressed blocks were identified by the Central Ground Water Board, taking into account groundwater levels in 2017. Over exploitation of groundwater is cited as reasons for these blocks falling under critical zone.

The government will organise a daylong workshop here to sensitise the officers ahead of the campaign. Activities during the campaign include construction of rooftop rainwater harvesting infrastructure, check dams, trenches, ponds and watershed structures.

Besides, intensive afforestation and renovation of traditional and other water bodies such as tanks will also be done in all water-stressed districts, 23 of which are ‘aspirational districts’. Aspirational districts are those which were identified by the government last year for expeditiously improving their socio-economic status through various interventions.