Piped water in every rural home in 5 years 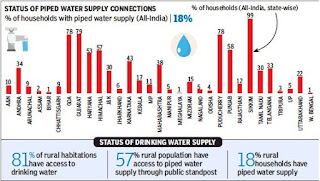 With more than 80% rural households yet to get piped water supply, the government announced to roll out a new mission to ensure “Nal se Jal” (water from tap) for each house in villages in the next five years as promised in BJP’s poll manifesto.

After a stock-taking meeting with ministers and representatives from all states barring West Bengal, Union Jal Shakti minister Gajendra Singh Shekhawat said the Jal Jeevan Mission will be launched to cover 14 crore households.

The minister said in the coming years there will be a deficit of 43% between water availability and requirement.

Under the Jal Jeevan Mission, both ground and surface water will be used to meet the requirement. Union drinking water secretary Parameswaran Iyer said in villages where the quality of water is good, piped water will be sourced and supplied at village level.

In other areas where water quality is poor, there will be a trunk water supply system for a cluster of villages and piped water will be sourced from elsewhere. The communities such as village panchayat would manage the operation and maintenance of the facilities wherever feasible. Iyer, who played key role in Swachh Bharat Mission, said there will be third-party verification and funds will be released by the government.