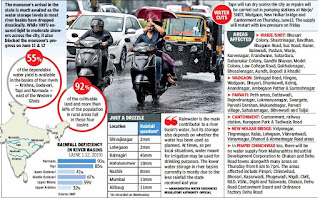 Of the six major river basins in Maharashtra, the water storage in five — Godavari, Tapi, Krishna, Mahanadi and the west flowing rivers in the Konkan — has dropped lower than the average of last 10 years, a Central Water Commission report said.

Less rainfall during last year’s monsoon could have been a contributor to this drop. Supplementary data from the India Meteorological Department reveals that between June 1 and June 12 this year, the rainfall in all these basins has been “deficient” to “largely deficient” — meaning a deficiency from around 29% to 94%.

Deficiency in a river basin’s rainfall, in comparison to its normal rainfall, is indicative of less than normal rain in the region where the basin is located.

CWC data has shown a drastic drop in the water storage levels of the river basins in comparison to the average in past 10 years. The biggest drop has been recorded in the Tapi basin, where the water storage level has fallen more than 79% below past 10 years’ average. The second highest dip was seen in the Krishna basin (46%), followed by Godavari basin (28%) and Mahanadi (1.49%), revealed CWC data.