India to buy US missile system to shield Delhi 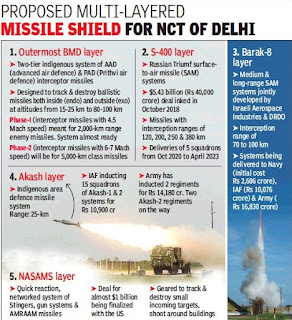 India is swiftly moving ahead to acquire the National Advanced Surface to Air Missile System-II  from the US, which will be used along with indigenous, Russian and Israeli systems to erect an ambitious, multi-layered missile shield over the National Capital Territory of Delhi against aerial threats ranging from drones to ballistic missiles.

Defence ministry sources said the US is likely to send the final draft of the ‘letter of acceptance’ for the sale of NASAMS-II to India under its foreign military sales programme, at a cost of over Rs.6,000 crore (almost $1 billion), by July-August.

The MoD had earlier granted ‘acceptance of necessity’ to the NASAMS acquisition, which was followed by India issuing a formal ‘letter of request’ to the US.

Though the US is mounting pressure on India to also consider its Terminal High Altitude Area Defence and Patriot Advanced Capability missile defence systems, MoD sources said “there is no plan to scrap” the $5.43 billion (almost Rs.40,000 crore) deal inked with Russia for five squadrons of the advanced S-400 Triumf surface-to-air missile systems.

India inked the S-400 deal with Russia in October 2018 after four years of extensive negotiations and an inter-governmetal agreement despite the threat of sanctions under the US law called CAATSA (Countering America’s Adversaries through Sanctions Act).

While the quick-reaction NASAMS is being specifically acquired for the missile shield over Delhi, the S-400 systems, scheduled for delivery in the October 2020-April 2023 time frame, are meant for strategic deterrence against China and Pakistan along the borders as well.

The S-400 systems can detect, track and destroy hostile strategic bombers, jets, spy planes, missiles and drones at a range of 380 km.

As per the proposed overall air defence plan for Delhi, the innermost layer of protection will be through the NASAMS. It will be a combination of different weapons like Stinger surface-to-air missiles, gun systems and AIM-120C-7 AMRAAMs (advanced medium-range air-to-air missiles), backed by three dimensional Sentinel radars, fire-distribution centres and command-and-control units. “The networked system, capable of even shooting around buildings, will take care of 9/ 11-like and other close-in threats,” said the source.

The outermost layer of Delhi’s missile shield will be provided by the indigenous two-tier ballistic missile defence system being developed by DRDO. This system’s AAD (advanced air defence) and PAD (Prithvi air defence) interceptor missiles are currently geared to intercept enemy missiles, in the 2,000-km class, at altitudes from 15-25 km to 80-100 km. The second layer will be through the highly automated and mobile S-400 systems, which will have missiles with interception ranges of 120, 200, 250 and 380 km, backed by their associated battle-management system of command posts and launchers, long range acquisition and engagement radars.