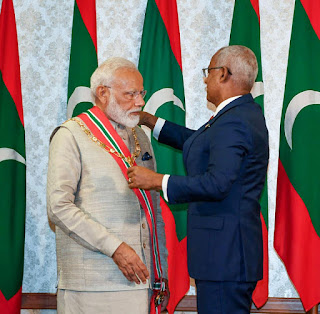 After having long been at the receiving end of Chinese expansion in the Maldives, India seems to be clawing back some of its earlier influence with the strategically located country.

As PM Narendra Modi landed in Male, Maldivian foreign minister Abdulla Shahid said that India had a key role to play in the maintenance of peace and stability in the Indian Ocean, and in turn the development and security of the Maldives.

Modi’s is the first bilateral visit by an Indian PM to the Maldives — seen until recently in China’s economic and security grip — in eight years. Male on Saturday conferred on Modi its highest honour to foreign dignitaries, “The Order of the Distinguished Rule of Nishan Izzuddeen”. “The Maldives recognises the profound link between stability and peace in the Indian Ocean, and the stability, peace and progress of the Maldives,” said Shahid.

Both countries had cooperated in joint patrolling, aerial surveillance, held joint exercises, and trilateral exercises with Sri Lanka. “The purpose of these exercises and joint activities is to maintain peace and stability of the Indian Ocean. India is also working with our security personnel and our police, to expand their capacity and increase technical know-how”.

Modi will be inaugurating a training centre for the Maldivian defence forces during his visit, his first abroad since returning to power.

India’s security role in the region was perhaps most undermined by the previous Abdulla Yameen government to throw out Indian military choppers from the archipelago. The situation though was dramatically upended by the ouster of Yameen and with the Ibrahim Solih government taking over.
“The Maldives is the only country in South Asia that PM Modi had not visited, and for him to visit now, signals the Indian government’s trust in the President Solih government...,” said Shahid.

“India has been a constant friend and a partner in the development journey of the Maldives. Most recently, India has extended a package of $1.4 billion, including budgetary support, currency swap and line of credit,” he added.

This year we will mark 54 years since the establishment of formal diplomatic relations but, as Shahid said, the ties go beyond that.

“Our people are connected, through shared values, culture, and affinity. With the recent entry into force of the Visa Facilitation Agreement, these people-to-people ties have expanded and strengthened,” said the foreign minister, acknowledging India’s support to human development and capacity building.

Shahid said Male was working with India to expand cooperation in health sector, to train health care professionals in the country, in addition to doctors and nurses at the Indira Gandhi Memorial Hospital.

In a clear dig at China, PM Narendra Modi told the Maldivian Parliament that India’s developmental partnership was intended to empower and not weaken, and was not meant to increase dependence of others on it or bury future generations under burden of debt.

Without naming Pakistan, Modi also said state sponsorship of terrorism was one of the biggest dangers to the world — a message that was expected to resonate with his audience given that Maldives has been grappling with the problem of radicalisation. He said India was committed to a “Neighbourhood First” approach and sees the region as an area of growth and security. The reference to the perils of heedless borrowing is key given Male is seen as a victim of China’s ‘debt-trap’ diplomacy.

We don’t want to either increase people’s dependence on us or to leave their future generations with an impossible burden of debt,’’ Modi said in his speech at the People’s Majlis in Male. One of the main reasons for Modi not visiting the Maldives during his first term was the attempt by the previous Abdulla Yameen government to play China against India. The Maldives is trying to figure out how much it owes to China but several reports from Male have stated Yameen’s policies resulted in 70% of Maldives’ external debt to China.

Except for Bhutan, all other neighbours of India have officially joined China’s BRI (Belt and Road Initiative). Some, like the Maldives, are currently reviewing projects they have undertaken fearing a debt trap that is seen as a possible fallout of the “Silk route” initiative.

Reaching out to India’s neighbours, Modi said his government’s slogan ‘sabka saath, sabka vikas, sabka vishwas’ was not just for India but also the basis for India’s ‘Neighbourhood First’ policy. Modi also announced India’s contribution for the conservation of the Friday Mosque in the Maldives. “There is no other mosque in the world like the Friday Mosque which is made out of coral,’’ said Modi, who started with Eid greetings.

The PM also called for a global conference on terrorism describing the menace as one of the biggest challenges facing the world. “Terrorists neither have banks nor weapon factories but they are still able to access these. How is that possible? Who provides them with these?’’ he said. “Terrorism is not a threat to any country or region but to the entire humanity. It is really unfortunate that we still distinguish between good terrorists and bad terrorists. We have lost a lot of time because of petty differences. Paani sir se upar ja chuka hai (it has become intolerable),’’ said Modi, adding that all forces needed to unite against terrorism.

“Just as the world community has organised conventions and conferences to deal with climate change, why can’t it do the same on terrorism. We need a global conference to plug the loopholes which are exploited by terrorists to carry out their activities. Our future generations will not forgive us if we fail to do this,’’ said Modi.

Describing India’s SAGAR (Security And Growth for All in the Region) policy as the blueprint for cooperation in the Indo-Pacific, Modi said India was not going to use its power for its own prosperity alone. “We will use it for common security and prosperity and for a better future. And to help others enhance their capabilities and to offer humanitarian assistance in times of emergency,’’ said Modi, recalling Mahatma Gandhi’s remark that there is no limit to extending services to neighbours.