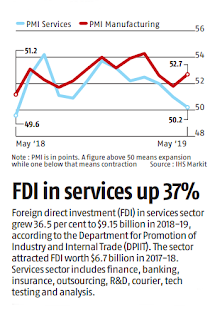 India’s services sector recorded the slowest growth in 12 months in May, as elections hit fresh deals. The Nikkei India Service Purchasing Managers’ Index slipped to 50.2 in May, from 51 a month ago.

A score above 50 shows expansion in the sector, while anything below it indicates contraction. Business inflow at service providers was slowest in eight months.

Services sector output rose 12.2% in FY18, as per growth numbers released by the government last week. Output of utilities and construction sectors, however, dipped 3.1% and 7.4%, respectively, in the fourth quarter.

Manufacturing fared better in May with a score of 52.7 — up from 51.8 in April — as new order growth took the index for overall private sector growth to 51.7 — on a par with the previous month.

The economy grew slower than expected at a 20-quarter low in January-March due to slow growth in manufacturing and agriculture, dragging the overall growth to a five-year low in FY19 to 6.8%.

The report showed sectoral hiring picked up in May as companies became more confident about prospects.

Services exports grew at the fastest rate in 11 months in the third consecutive month of expansion. “Optimism was largely linked to predictions of an improvement in underlying demand, favourable public policies and planned marketing. Though up from April, the level of positive sentiment was below its long-run average,” the report said. While some companies indicated that successful marketing boosted demand, others said competitive conditions and disruptions from elections prevented them from securing new work.

Employment in the services sector continued to grow in all five broad services. of the economy led by information and communication. Hiring in the sector is in line with positive business expectations of service providers who predicted a growth in demand and favourable public polices in the coming 12 months. The services firms were also helped by a lack of inflationary pressure in the sector.

An interest rate cut may also help spur growth in the services sector. RBI is conducting a monetary policy committee meeting, with many experts predicting a 25-basis-point rate cut. One basis point is 0.01 percentage point.