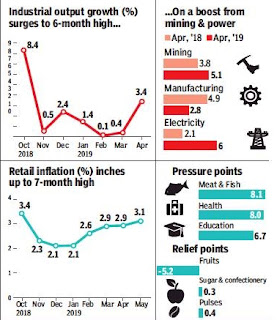 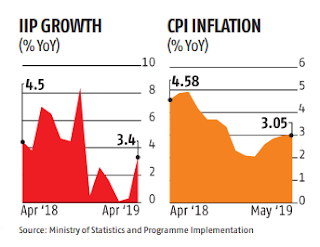 Retail inflation shot up to a seven-month high in May on the back of higher food and vegetable prices, while industrial output growth rose to a six-month high in April, prompting economists to say that there is a need to revive demand.

Retail inflation, as measured by the consumer price index, rose to 3.1% in May from previous month’s 3%, but well below the RBI’s target. Separate data showed the index of industrial production rose 3.4% in April — faster than the previous months’ upwardly revised 0.4%, but slower than the 4.5% in the year-ago period.

Last week, the RBI cut interest rates for the third time in a row to a nine-year low of 5.75% and changed its stance to accommodative. The rate cuts came against the backdrop of a slowdown in overall growth and highlighted the central bank’s commitment to prop up growth.

Some economists said the budget should signal steps to revive demand.