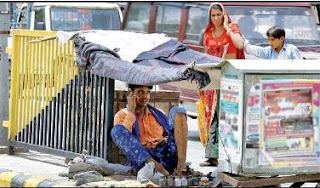 How does one wake up to a minimum temperature of 34 degrees Celsius, or plan the day when mornings, afternoons and evenings melt into one solid time block, seamlessly dissolving in each other under a burning, brutal sky? Life in Rajasthan’s Churu now is like living on the edge of a tandoor. The glow of the fire seemingly inches away from scalding the skin.

At 50.8 degrees Celsius (last Saturday) and 50.3 (last Monday), it was the hottest place in the world on these two days. And it’s driving people crazy. For more than a week now, the temperature has hovered around that point. Residents have altered their work cycle, eating habits and lifestyle to cope with the blistering heat. Nothing seems enough.

“What has added to our agony is the power cut that starts from 4am, when it’s already close to 35 degrees C,” said Radhey Sharma, a retired government employee at the Housing Board Colony in Churu. “Thereafter, we go out and bring at least 10 kg of ice, which is like a regular grocery item these days, to put in the water tank and air-coolers.”

There’s a rush of people at the district hospital, all complaining of vomiting, diarrhoea, heat stroke and skin ailments. Leaves of doctors have been cancelled and the entire district is on high alert.

Not surprisingly, says another doctor, Churu’s people have quickly changed the way they eat. Chaach (butter milk), raw onion, curd and chapati have become some kind of a universal breakfast, with many skipping lunch altogether. “During such weather, it’s better to fill oneself up with fluids,”he explained. “The more you consume oily stuff and carbohydrates, the greater the chances of compounding health problems.”

Out on the road, it’s almost eerie. By 10.30 am, when most of India is bustling, the streets start emptying out in Churu. Public places are deserted, there are few passengers at railway stations and bus stands. Farmers, those mostly out in the sun, hit their fields at 4 am.