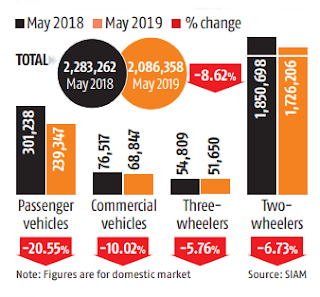 Passenger vehicle sales in India posted the steepest drop in nearly 18 years in May amid weak demand and a liquidity crunch faced by non-bank vehicle financiers, prompting major auto makers to cut production.

Sales fell 20.6% in May to 239,347 vehicles from a year earlier. It was the biggest fall since a 22% decline in September 2001 and the seventh consecutive drop in monthly domestic passenger vehicle sales. Vehicle sales in India are counted as factory dispatches and not retail sales.

With retail demand staying weak for several months, some of the top carmakers such as Maruti Suzuki India Ltd and Mahindra and Mahindra Ltd have announced temporary factory closures to trim mounting stocks at their dealerships as well as factories.

In the passenger vehicle segment, car sales fell 26% from the year earlier in May to 147,546 units.

Sales of utility vehicles and vans fell 5.6% and 27%, respectively.