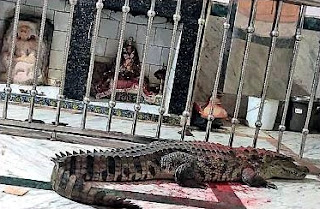 On alert after the theft at a 200-year-old temple in their village, a group of youngsters from Palla in Mahisagar district was keeping vigil on Saturday night.

Hearing some movement inside the temple at around 1.30 am, they thought burglars had struck again. Wanting to nab the thieves redhanded, the boys swooped inside the temple. But for a moment they could not believe their eyes.

A six-foot-long crocodile was resting in front of the idol of Khodiyar Mata. Interestingly, crocodile is the vehicle of this deity.

The group of young men then informed the priest of the temple Shiva Maganlal and other villagers. The news and photos of the crocodile spread in Palla and surrounding villages, triggering an influx of people who believed that this was an auspicious episode.

The devotees who had flocked to the temple in large numbers tried to catch a glimpse of the crocodile through iron grills of the windows and doors as the temple had been locked up by then. However, even through the narrow gaps, devotees threw kanku (vermilion powder) on the crocodile due to which it got agitated.

The crocodile is suspected to have come out of the pond located near the temple. While the crocodile was sighted an hour after the midnight, the forest department was informed only on Sunday noon.

In fact, the locals did not allow the forest team to rescue the crocodile initially.

“We had to explain them that it is a schedule I animal and it has to be taken back to the place from where it had come. It was after a lot of convincing that they agreed and allowed us to rescue the animal,” said R V Patel, incharge range forest officer . He said that the crocodile had come out from a pond which is at a few metres away from the temple.

“The crocodile had become aggressive as it was surrounded by hundreds of people for several hours so we had some difficulty, but eventually released it back in the same pond,” Patel added.