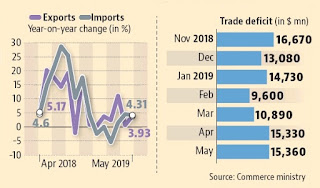 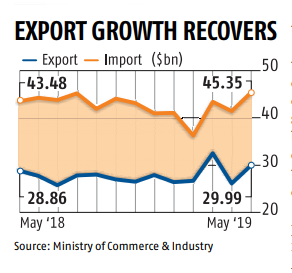 India’s trade deficit expanded to a six-month high of $15.4 billion in May, with import growth outpacing export growth following a 37% jump in gold imports.

Exports grew 3.93% in May, while imports rose 4.31%. Exports have been in low single digits in six out of the last seven months, barring March when it grew in double digits. Rising crude oil prices, amid sanctions on Iranian oil imports, could further increase imports and put pressure on India’s current account deficit. China’s exports in May inched up 1.1%, while imports fell 8.5%, leading to a significantly higher trade surplus of $41.65 billion than analysts projected. The escalating trade war between the US and China, and rising protectionism have cast a shadow on India’s prospects for higher exports.

In March, the WTO had projected trade growth to fall from 3.9% in 2018 to 3.7% in 2019. It had cautioned that these estimates could be revised downward if trade conditions continue to deteriorate. The International Monetary Fund also cut its global growth forecast for 2019 by 20 basis points to 3.3%, the lowest since the 2008 financial crisis, blaming the US-China trade tensions, loss of momentum in Europe and the uncertainty surrounding Brexit.

The commerce ministry is contemplating an export promotion scheme, along with a production-based support scheme, to boost Make In India as part of its 100-day action plan. The new export promotion scheme may replace the existing Merchandise Export from India Scheme, following the US decision to challenge India’s existing export subsidy schemes at the WTO.