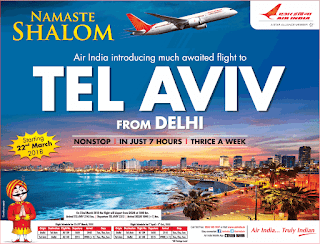 Air India’s maiden flight to Israel has landed in Tel Aviv, reducing the travel time substantially after Saudi Arabia for the first time allowed a commercial flight to use its airspace, indicating a thaw in relations between the Arab kingdom and the Jewish state.

Heralding a new beginning in the people-to-people contact and diplomatic ties between India and Israel, the state-run Air India introduced the direct thrice-a-week flight from New Delhi to Tel Aviv on Friday.

Saudi Arabia permitted the airline to use its airspace, enabling it to take a shorter route, covering the distance in 7.25 hours, about 2.10 hours less as compared to the only other airline that flies between the two countries — Israel’s national carrier El Al.