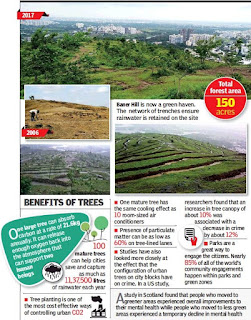 It took 11 years of relentless effort, but today, Baner hill has been transformed to hold on to over 2 crore litres of rainwater.

The massive reforestation campaign was carried out by a group of local residents who turned up at the hill every Sunday over the past decade to plant and nurture the trees. However, the project was not limited to green cover. Residents also created over 85,000 feet of continuous contour trenches to ensure zero surface runoff during the rains. It certainly wasn’t an easy task. For two hours every Sunday, the thrust was on tree plantation, conservation of the trees and creation of the contour trenches. Residents organized their own water supply and brought their own tools.

The efforts paid off. The water conservation has led to a considerable rise in groundwater levels in the area. Moreover, the urban forest, with about 55 species of herbaceous flowers, has been able to attract over 70 species of birds and butterflies.

Monali Shah, who has been associated with the initiative for several years, says the journey has been absolutely inspiring “Baner hill was barren 11 years ago. There was only one tree at the top of the hill and another one at its foot. Then, Chandrakant Garudkar, a local medical practitioner, started this reforestation movement as part of an effort to transform the hill. At its later stages, the campaign was named the Dr Garudkar Vasundhara Abhiyan for biodiversity conservation and restoration of the Baner hill,” Shah said.

A group of 30 to 35 core members have been responsible for steering the campaign. Many educational institutions, IT companies and various groups of citizens later became active participants in the project.

Citizens say they have avoided the construction of a road to the hilltop to restrict entry of vehicles. However, the site has been thrown open for morning walkers.

Chetana Gaikwad, another member of the group, said residents from nearby areas, who have wells and borewells at their homes, have noticed a considerable rise in groundwater levels because of the effective regulation of rainwater. This is very good news for an area that has been plagued by years of water shortage. Meanwhile, the Pune Municipal Corporation has decided to honour Garudkar’s efforts. A resolution has been passed by the PMC to name the site Dr Chandrakant Garudkar Biodiversity Park.