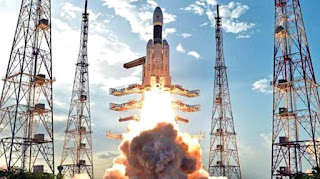 When GSLV Mk-II ejected the satellite GSAT-6A into orbit, for many it was a boost for communications in the country, for some it was a step forward for military strength but for Indian Space Research Organisation it was a dress rehearsal for its second mission to the moon. The space agency tested certain improved critical systems in the launch vehicle that may eventually be used in its future missions. It was also to attract foreign satellites that could use the rocket for launches.

“The launch vehicle demonstrated the capability of GSLV as an operational launcher. It has evolved as a workhorse,” said P Kunhikrishnan, director at Satish Dhawan Space Centre. At 4.56 pm, the Geosynchronous Satellite Launch Vehicle took off for its 12th flight with an indigenous cryogenic upper stage from the Satish Dhawan Space Centre in Sriharikota, Andhra Pradesh. Around 17 minutes after lifting off, the three-stage rocket injected the satellite into a geosynchronous transfer orbit. In the coming days, the scientists will fire the thrusters on board the satellite to manoeuvre it to a geostationary orbit at an altitude of 36,000 km from earth.

“This GSLV is not like any other vehicle. The importance of this mission is that we have enhanced the performance of the vehicle with an improved Vikas engine that has increased thrust by 6%, thereby enhancing payload capability by 50%,” said Isro chairman K Sivan.