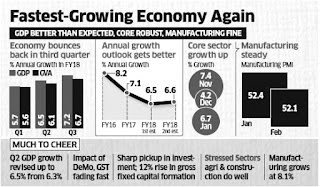 India’s GDP grew 7.2% in the third quarter, surpassing expectations and wresting back the mantle of fastest-growing economy from China on the back of a rebound in industrial activity, especially manufacturing and construction, and an expansion in agriculture. China grew 6.8% in the quarter — and is expected to grow at that pace for the full year.

Experts also pointed to the growth in gross fixed capital formation as a sign that investment, which has been a laggard, may be resurgent, although the slowing of private consumption was a concern. The numbers indicated that the economy had shaken off the effects of demonetisation and come to grips with the goods and services tax.

India’s FY18 growth projection was revised marginally upward to 6.6% from 6.5% estimated earlier, compared with 7.1% in FY17. Second-quarter growth was revised to 6.5% from 6.3% earlier. Economists had estimated December quarter GDP growth at 6.5-6.9%.


Growth started to pick up in the July-September quarter within the April-June period due to destocking in the run-up to the GST rollout and the lingering impact of demonetisation. The Economic Survey had projected that a series of major reforms undertaken over the past year will allow real GDP growth to rise to 7.5% in FY19, thereby reinstating India as the world’s fastest-growing major economy.

Some experts said India could exceed the International Monetary Fund’s 6.7% GDP growth estimate for the current year if the recovery trajectory improves even further, possibly allowing it to retain the fastest-growing economy title.