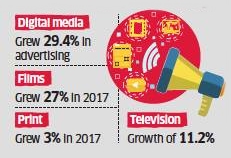 India’s media industry, harnessing the growth in the broader economy and increasing disposable incomes, may expand in double digits to touch about ₹2 lakh crore (₹2 trillion) in the next two years.

While demonetisation and GST rollout affected advertising across sectors, digitisation helped subscription revenue to accelerate faster. However, advertising is expected to continue expanding until 2020, led by the digital medium.

DIGITAL MEDIA: It continues to lead the growth charts on advertising. Even as subscription revenues are emerging and are expected to make their presence felt by 2020, digital media grew 29.4% in advertising and 50% in subscription last year.

PRINT: After digital, it was print that accounted for the second largest share of the Indian M&E sector, growing at 3% to reach ₹30,300 crore in 2017. Print media is estimated to grow at an overall CAGR of approximately 7% until 2020, with vernacular at 8-9% and English slightly slower, despite the FDI limit remaining unchanged at 26%.

While magazines contributed 4.3% to the total print segment, the industry was largely at status quo with not many significant new launches in 2017.

The report highlights that today, 98% readers read dailies and 20% read magazines, in a reader base of 395 million, or 38% of the population. Readership has grown by 110 million over the last three years with the rural reader base being larger than urban.

FILMS: The Indian film segment grew 27% in 2017 on the back of box office growth — both domestic and international — coupled with increased revenues from sale of satellite and digital rights.

All sub-segments, with the exception of home video, grew and the film segment reached ₹15,600 crore in 2017. 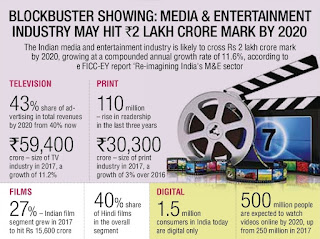