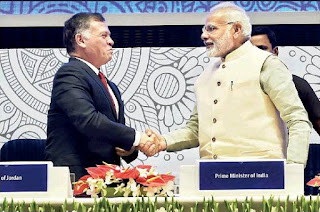 India and Jordan signed a framework defence agreement which envisages a whole range of possibilities from defence acquisitions by Jordan to defence exercises and closer security cooperation.

India and Jordan signed 12 agreements after the high-level talks, covering areas as diverse as mass media, health, culture and tourism. But the area of interest for both countries is clearly defence and security. King Abdullah, who is himself a trained para-trooper and a Sandhurst alumni, inspected the Indian-made Advanced Light Helicopter at Palam, and reviewed an anti-terrorism demonstration by NSG at Manesar.

During the discussions, both countries reiterated their support for the Palestine cause, officials said. India and Jordan started a cyber security dialogue in July 2017.

King Abdullah addressed the Indian industry on Wednesday and invited Indian companies to utilise Jordan as a gateway to Europe and the US, taking advantage of its free trade agreements with these vast markets. Sources said a number of B-to-B agreements were signed. Jordan has already asked for assistance for its massive refugee population which include 1.3 billion Syrians, as well as Iraqis and Palestinians.