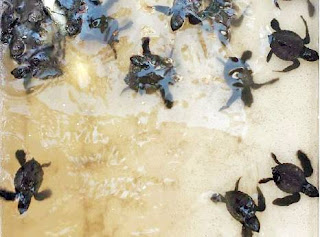 Around 85 Olive Ridley baby turtles hatched on Versova beach much to the delight of beach clean-up brigade volunteers and morning walkers.

Afroz Shah and his volunteers known for their manual beach cleanup drive stumbled upon the hatchlings at 9.30 am near Sagar Kutir Wadi on Versova beach on Thursday and informed the forest officials to allow them to go back into the sea without hindrance.

Prashant Deshmukh, range forest officer, west, Mumbai, told Mirror, “85 Olive Ridley babies that were found were released into the sea. These sea turtles come to lay their eggs on the same spot where they are born. They were sighted after 20 years. The hatchlings emerged from a three feet deep pit and then they come back on top of the shore.We will be there for five days and the area will be under surveillance to look for more female turtles. Oliver Ridley has mass nesting. There must be one female. If there is more nesting, more babies will be present. One female turtle lays 100-200 eggs at a time.”

Deshmukh said that these sea turtles play an important role as scavengers and do the job of cleaning the sea waters. “Just like how hyenas feed on the leftover of the big cats, Olive Ridley turtles feed on the leftovers of the whales and other big fish,” said Deshmukh.

For Afroz Shah this is the 126th week (2.5 years) since he embarked on the Versova beach clean-up drive. Twiteratti congratulated Shah and his team of volunteers for this unusual phenomenon.

“Olive Ridley turtles existed in all beaches of Mumbai 20 years back. They come to nest, hatch and go back. When they hatch they have to go into the sea immediately. They come back to the place they were born to nest and hatch. For the past 20 years, there was no sighting of Olive Ridley turtles. Now, with the campaign on freeing ocean of marine debris, automatically the turtles come back. Along with my volunteers I have removed 13 million kgs of plastic.This is a personal journey for me and the volunteers to connect with the ocean. This journey will continue till we get our ocean and marine species back in our life,” said Shah.

Deshmukh said,“Dogs came to feed on the baby sea turtles. A pathway was made by Shah and team for the turtles to go back into the sea safely. None of the turtles died.”