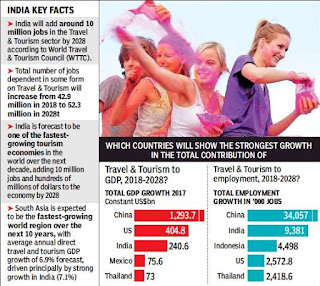 India is expected to establish itself as the third largest travel and tourism economy by 2028 in terms of direct and total GDP, a 2018 economic impact report by World Travel & Tourism Council has said.

The WTTC report also said India will add nearly 10 million jobs in the tourism sector by 2028 and that the total number of jobs dependent directly or indirectly on the travel and tourism industry will increase from 42.9 million in 2018 to 52.3 million in 2028.

Guevara welcomed the government’s ambition to make the country a global cruise destination with the creation of the new cruise port in Mumbai.

The WTTC, however, once again red flagged the sector’s concerns over the three-level implementation of GST in the hospitality sector and said the government must bring in tax reforms to make India’s tourism sector more competitive with other countries in the region.“I share the worry of many in the Indian hospitality sector that setting GST at 28% for hotel bedrooms over 7,500 ($115) risks curtailing the very demand which reforms to visas and international market have created,” Guevara said.