The Migrant Capital of India 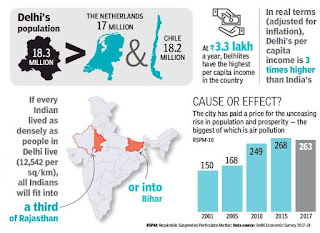 Delhi’s population grew by nearly 1,000 a day in 2016, out of which over 300 were migrants who came to the city to settle down. The share of migrants in the capital’s population growth reached 33% — highest in 15 years we have data for. The city state’s booming services economy and its highest per capita income among states makes it the number 1 destination for migrants from all parts of the country