In a stunning reversal of fortunes for 20 Aam Aadmi Party MLAs, the Delhi high court restored their status as legislators after it set aside the Election Commission of India’s disqualification decision for violating principles of natural justice. The court ended any scope for by-elections in Delhi in the near future as it remanded the original complaint of advocate Prashant Patel of breach of office-of-profit norms back to the EC so that the lawmakers get an oral hearing and a chance to address the arguments on merit.

This means the MLAs are not off the hook on the tricky issue of whether they held an office of profit or not as EC will now have to take a fresh call. But till then, they continue to remain legislators since the HC didn’t go into the merits of the case and limited itself to the EC’s lapses in procedure.

A bench of justices Sanjiv Khanna and Chander Shekhar also quashed the President’s order disqualifying the AAP MLAs on the ground that the EC opinion “is vitiated and bad in law for failure to comply with principles of natural justice”. In a detailed 79-page order, the bench set aside the EC’s opinion for “violation of principle of natural justice, namely failure to give an oral hearing and opportunity to address arguments on merits of the issue.”

Interestingly, the order didn’t come as a surprise to many MLAs since during the day-to-day hearings, the bench had specifically sought their stand on whether they had any objection to the court sending the matter back to EC for an oral hearing.

The MLAs, who were appointed parliamentary secretaries, had challenged their disqualification for holding an office of profit. In response to the HC poser, they had requested it to remand the case back to the poll panel with a direction to hear the matter afresh, a plea that was answered in their favour on Friday.

In its judgment, HC noted that while EC was free to frame its rules and procedure on how to conduct hearings, these must be fair and not arbitrary. The “flexibility” provided to EC in this regard, the court pointed out, ends once it decides to go deeper into facts of a particular complaint. Proper hearings must then be accorded since “consequences of disqualification are serious as an elected representative of the people would cease to be a member of the legislature. Factual disputes and legal issues could arise and require determination.”

HC also faulted the failure of EC to communicate to the petitioners that one of the commissioners, O P Rawat, had first recused from the case and then rejoined.

In its defence, EC had filed a list of reference cases from 2008 onwards in which no oral hearing or hearing was given. Backing its recommendation to the President for AAP MLAs’ disqualification, the poll panel had submitted that the legislators cannot claim that they were not holding an office of profit as they were appointed parliamentary secretaries to ministers in the Delhi government in March 2015.

In September 2016, the Delhi high court had abolished their appointment as parliamentary secretaries but the EC maintained the violations don’t get erased automatically, a point Friday’s bench agreed with. 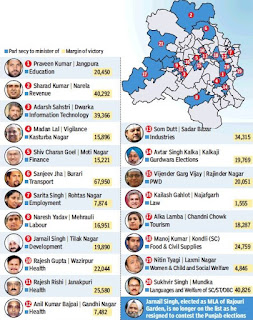